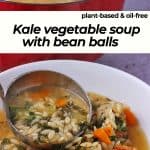 Fresh and rich kale vegetable soup is made all the more satisfying with savory baked bean balls. This complete meal in-a-bowl is just the thing for cool evenings or whenever you yen for a hearty bowl of satisfaction.

Uncomplicated bean balls require only 8 ingredients that won’t take long to connect. In addition to the white beans (I used cannellini), I used whole wheat breadcrumbs as a binder. The flavor is a bit savory with soy sauce and nutritional yeast, with just a bit of zing from lemon zest.

You’ll find nutritional yeast or nooch as it’s fondly referred to by many plant-based eaters, in many health food stores and in larger supermarkets. Open the container and you’ll find pale yellow flakes that are light and fluffy. Sometimes, it’s sold as a powder as well.

Nutritional yeast is a food additive, Saccharomyces Cerevisiae which is grown on molasses, harvested, washes and then dried with heat to deactivate it. Deactivation means that it won’t behave like the yeast you might add to your bread dough (no leavening agent). Nutritional yeast is mainly used as an ingredient and one reason for its popularity is the is contains B-complex vitamins. Some brands are fortified with B12 which makes it all the better.

We’ve already established that nutritional yeast isn’t the stuff you use to create a lift out of dough, so what’s the point? In addition to the ‘nutrition’ part, they main reason to use it is taste. You don’t need much, but a tablespoon or two adds richness to soups, sauces, gravies, burgers and yes, even bean balls.

That’s the flavor most often associated with our nooch.  Umami is known as the fifth flavor, and best described as savory. Some folks rave about the nutty, savory flavor it adds and others swear that is has a cheesy flavor. Although I wouldn’t recommend using it in isolation as a cheese substitute, nutritional yeast adds a ‘certain’ something or depth of flavor that you can’t replicate no matter how much salt or rich vegetable broth you add. The best substitute is white, Shiro miso or perhaps soy sauce.

Back to the bean balls

The best timing approach for this recipe is to start by making the bean balls. I chopped a large onion and used ¼ cup for the bean balls and just saved the rest for the soup. Alternatively, you could use ¼ cup of chopped scallions. This is where I used the zest of the lemon, reserving the lemon itself for the juice that gives the soup a bit of zing.

I started by making my own breadcrumbs as I has some leftover bread that needed using. Once I made sure that I had ½ cup, I put everything into a bowl and use a potato masher to blend everything. I tend to like a bit of texture, so I left a few of the beans whole. One thing to be mindful of is to mince the garlic before you add it. Otherwise you can end up with random (and possibly overpowering) garlic bits. That might be a zing to far.

Once you get everything blended, start rolling balls a little smaller than a golf ball. Try to make the balls relatively the same size so they bake evenly. You’ll need about 30 minutes of baking to get the balls firm on the inside and a bit crunchy on the outside. Plenty of time for soup making.

I lined my baking tray with parchment paper as the bean balls tend to stick a bit. I flipped the bean balls after about 20 minutes of baking. Patience is key here because if you try to flip them before they are browning on the bottom, they will stick and have a bit of a fall apart.

If you get concerned that the bean balls are getting too brown but are still soft in the middle, you can cover them loosely with foil after you flip them back over. Remember, the idea is to cover them with kale vegetable soup, so if they get a bit crunchy, all the better. We want them like hearty croutons so brown is ‘A’ ok.

The vegetable part of the soup begins with the usual three – onions, carrots and celery. Just sauté them for about 8 minutes until they start to soften. If they start sticking, just add a tablespoon of water or vegetable broth. A little sticking is ok because 30 seconds after you add the garlic, you’ll be adding 9 cups of vegetable broth. I reconstituted the equivalent amount of veggie cubes for this particular purpose. Add the vegetable broth serves to deglaze the pot which is a fancy culinary word for getting all the cooked bits off the bottom of the pot. Give a quick stir to help this process along.

After about 10 minutes of getting the vegetables started and adding the broth, you are nearly home once you’ve added the orzo. If you’ve not cooked orzo before, it’s good to know that it’s a pasta, made from semolina flour, which is from durum wheat. This means it’s definitely not gluten free. If you want to adjust the gluten, rice can be substituted, although you’ll want to be mindful of cooking times.

You’ll only need 8-10 minutes for the orzo to get done. My advice is that you look for orzo pasta that is of good quality and made with only semolina (or a super high percentage). This helps the orzo keep its shape and not get too mushy.

And finally, the kale

You’ll have about 20 minutes or less invested in your soup before it’s time to add the kale. You can add the lemon juice and fresh chopped basil at this point, because you will only be simmering the kale for about 5 minutes. This is enough time to soften the kale and allow the flavor of the lemon juice and basil to saturate the soup.

Kale vegetable soup and bean balls – all together now

You could honestly just have a bowl of the soup and be incredibly satisfied, but adding savory, slightly crunchy bean balls makes it special. Just add a few to the bottom of the bowl and ladle up a big bowl with all the goodness of the veggies plus the chewiness of the orzo. This makes for a really satisfying meal, although as much as my eyes told me, ‘yes, another please’, I only managed one bowl before I was quite full.

I suppose this is a good point to discuss reheating. We discovered that the bean balls reheat after about 30 seconds in the microwave. Alternatively, you can wrap them in foil and reheat in the oven. I recommend that you store the soup and bean balls separately, so the balls retain their crunch and shape.

I wasn’t aware of the whole umami idea until a few years ago after it was already well in fashion. When it comes to taste, it’s always less about a label than what just tastes good. While being current on the ‘lingo’ might make for better conversation in certain circles, good food never goes out of style. Peace. 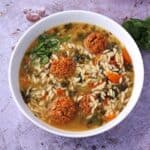 Fresh and zesty kale vegetable soup with orzo is made even more delicious and savory with baked bean balls for a satisfying plant-based meal in-a-bowl.

To serve, add a few of the baked bean balls to each bowl and cover with a generous serving of soup. Serve with lemon wedges if desired.