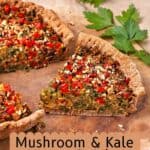 This tasty dinner quiche is made with a filling of veggies, chickpeas, and chickpea flour without silken tofu or eggs (keeping it vegan) and no added oil. We’ve relied on our go-to whole wheat pie crust, the same one we use for chickpea pot pies, only this time there’s no top. It's another classic recipe ready for special dinners or lazy weekend brunches.

Although this recipe requires a few more ingredients than we'd usually use, the three-step recipe prep is surprisingly straightforward. Make the crust. Make the chickpea blend. Cook the mushroom-kale filling. Once you fill the pie crust and top it with a handful of diced red peppers and chopped hazelnuts, it gets baked to firmness.

Flax seeds – If you aren’t familiar with flax eggs, it’s time. Use a 1:3 ratio of ground flax seeds to water. If you can only find whole flaxseed, then use a spice grinder before mixing them with water. Whole flax seeds won't yield the same result.

Mushrooms – I used brown chestnut mushrooms (button mushrooms). You can use any mix you like, 3 cups chopped.

Kale – Measure out 2 cups of chopped kale. If you prefer, you can use spinach or another leafy green. If you use frozen kale or spinach, be sure you thaw it first and then squeeze out as much moisture as possible. Press it into a small mesh strainer or between several paper towels.

Red bell pepper – Red bell peppers add a sweet flavor and make a beautiful tart topper. Use half of the diced pepper in the filling and reserve half to toss over the top.

Hazelnuts – Hazelnuts are used both in the filling and as a topping. You can also use walnuts or possibly pecans, although we like the crunchiness of the hazelnuts best.

Chickpeas – Cooked chickpeas are used for making the batter. Although you’ll blend them in the food processor, they will still retain some lumps for texture (and more fiber). I’ve not tried this recipe with another kind of bean, but I would imagine you could use white beans with success.

Nutritional Yeast – Nutritional yeast will add a bit of cheesy flavor along with a dose of essential B vitamins (including B12 if it’s fortified). It's worth pointing out that you can make this recipe with or without nutritional yeast.

Chickpea flour – Also known as besan, gram, or garbanzo bean flour, chickpea flour is a quiche binder. Chickpea flour is readily available, but if you struggle to find it, then you can always make it yourself. Add dry chickpeas to a spice grinder and pulverize them into a fine powder. Then run the powder through a fine-mesh strainer to catch any larger pieces.

How do you reheat vegan quiche?

To reheat, wrap the remaining quiche in foil and heat it in the oven for 20 minutes until it is heated through.

Can I replace the kale with another green or vegetable?

If you don’t want to use kale or spinach, try finely chopped broccoli. Make it small and cook it with the filling. You can also use frozen. Be sure that you thaw it and press it so that it's as dry as possible.

Can I use a premade pie shell for this recipe?

You can use a premade pie crust for this recipe, but we recommend using a vegan crust, preferable, one that is not made with vegan butter or oil.

Where can you buy ground flax seeds?

You can find ground flax seeds in larger supermarkets or health food stores. If your grocery store only has whole flax seeds, then grind them in a spice grinder before mixing them with water to make the flax egg.

Since making this recipe, and with further effort to break the traditional quiche mold, a few quiche ideas have emerged from the kitchen. If you want to get creative, here are a few ideas to explore:

Bacon bits – dice up half a batch of our fav, sheet pan vegan bacon and mix it will the filling.

Vegan sausage crumbles – Make the entire batch of this favorite a day or two ahead. Use what you like and save the rest for a tofu scramble.

Vegan cheese – Vegan ricotta or even a sprinkle of hemp parmesan cheese will boost the flavor.

Cherry tomatoes – Instead of the diced peppers on top, try a few finely chopped cherry tomatoes. The flavor will be sweeter. 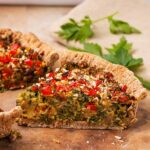 This savory homemade mushroom & kale vegan quiche is the vegan tart that unites comforting flavors and textures surrounded by a whole wheat crust.