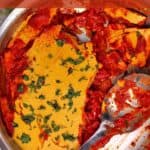 This recipe lands someplace between a frittata, a pie, and a casserole. You decide. I’m not bothered because all I’m really interested in is making something quick, tasty, and different for our weekend brunch.

Full disclosure – we’ve has this for lunch and dinner several times too.

There are several reasons why this meal suits any meal of the day. It has a savory tomato filling that is protein-fortified with a chickpea flour crust.  Serious satisfaction

Shakshuka (shakshouka) is a traditional North African dish of saucy tomatoes, peppers, onions, and spices. Great vegan ingredients, right? But here’s where we’ll be breaking with tradition. The idea behind the dish and how you’ll see it often is with eggs cracked directly into the simmering pan. After they cook, the casserole is ready to serve.

Shakshuka, a favorite Israeli meal, means all mixed up. We’re going to do a bit of mixing up ourselves because while we will stick with the traditional tomato mixture and spices, we’re building us a breakfast casserole.

Here’s how we'll accomplish this in super-simple steps:

Onions – Grab a medium-large onion, cut it in half from stem to end, lay each half cut-side down, and slice it.

Red bell pepper – It’s not a requirement that you use red pepper. A yellow or even green will do. My preference for red is that it lends extra sweetness. I find green slightly bitter, but if you like the flavor, go with it.

Just like the onions, slices of red pepper add a nice texture and pretty presentation. Once you cut the

Garlic – Use 4 plump cloves of garlic and add that after the onions and red pepper have cooked. You only need to stir a little before adding the spices.

The spices – Paprika (preferably smoked), chili powder (use a good one), and cumin provide a favorable combination that only gets better as the tomatoes cook and reduce.

Tomatoes – Canned cherry tomatoes or diced tomatoes make this recipe easy. Use good-quality tomatoes that are canned in their own juice.

Keep it simple. You will be adding specific spices, so this isn’t a good recipe for Italian style or tomatoes with additional spices.

The cooking process is quick.

Start with a heated skillet, then add the onions and red peppers. Because we aren’t using oil (we never do), be attentive to the skillet. It will only take about 5 minutes, so stir them consistently.

Once the onions start to get translucent and the peppers soft, mix in the garlic and then the spices.

Now, turn on the oven. In a few minutes, we’ll add a chickpea flour ‘lid’ over the saucy tomatoes. Then we'll sit back and bake up some breakfast magic.

There are four ingredients, including water needed to make the chickpea crust batter.

Chickpea flour is a popular gluten-free option for thickening sauces and stews. It also makes an exceptional binder for things like burgers.

Sans gluten is not the only reason you should consider chickpea flour. There is a high value of nutrition compared to wheat flour, including more protein, less fat for starters. I’ll take that.

And because it isn’t made from wheat, chickpea flour behaves a bit differently. It’s dense and sticky. When you use it to make pancakes, quiche, or in our case, a crust, it won’t be flaky but behaves more like an egg-based crust (think frittata).

The latter characteristic is why we’re using it. Our aim is to make a topping for the saucy tomatoes that gives our casserole flavor, protein, and sustenance. That's how to start the day!

Salt – It’s not often that I advise adding salt until after cooking. But after testing this recipe several times, add ½ a teaspoon of salt. I found the flavor of the crust, and thus, the overall dish is lacking without it.

Water – For 2 cups of chickpea flour, you’ll use 1 ½ - 2 cups of water. You’re mixing a pourable batter, not making a vegan crust to be rolled out.

After removing the casserole from the oven, allow it to sit for 5 minutes. The pan will be hot. Please be mindful that this includes the handle of the skillet. I speak from experience.

If you want to add a bit of color and flavor, add chopped cilantro (coriander) and/or parsley. It adds notes of fresh peppery flavor. Lemon wedges are a tasty addition for those of you who like it zesty.

How do you reheat vegan shakshuka?

If you store leftovers in a small casserole dish with the crust-side up, it’s easy to reheat. Cover the dish with foil and reheat at 4250 F. (2200 C.) for 15 minutes or until the filling starts to bubble. You can also reheat it in the microwave.

Can you make chickpea flour?

Chickpea flour can be made by grinding dried chickpeas using a high-powered food processor. I’ve made it in a spice grinder as well. After processing, run the flour through a fine-mesh strainer so that you can catch any chickpea pieces that have not been broken up.

Do I need an oven-proof skillet to make this recipe?

You can make this breakfast casserole in an oven-proof dish or baking pan. Simply transfer the tomato filling and then pour over the chickpea batter. 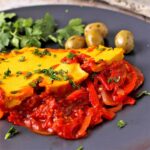