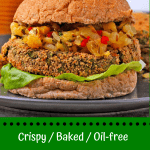 Savory baked spinach and potato patties with mashed potatoes, hero-sized portions of spinach, and South Asian flavors are a tasty treat sandwiched between buns or starring in your next brunch.

Somewhere between potato pancakes, and all those veggie burgers we love making and eating, comes yet another new veggie patty. Let’s face it, when we’re talking veggie burgers, the possibilities are endless.

This time, we’ve whipped up crispy baked patties with potatoes and spinach. These patties are so easy to make that you’ll even have time to put your feet up while they chill. And don’t spend time rolling your eyes, yes, you CAN put your feet up from time to time. The sky won’t fall.

After a few tasty trials, I made a command determination that leaving the peels on the potatoes was better than taking the time to peel them. Now, keep in mind that I was using thin-skinned potatoes. If you use potatoes with thicker skins such as Russets, then you may want to peel them. Thicker skins can be a bit tough even after boiling them.

If you stick to red potatoes, or any of the yellows, like Yukon, then just leave the peels, cube the potatoes, and get them boiling.

Before the 'way' comes the 'why.' When it comes to boiling potatoes, we do it because we want to retain more moisture than we’d get from baking. And if you’re making mashed potatoes or potato salad, boiling is the way to go. Don’t rule out boiled potatoes as a quick side-dressing up with a quick curry sauce. Gold dust!

The rules are the same no matter the intended purpose with slight variations depending on how they’re dressed for the dance (skin on or off):

1. Scrub the skins or peel and wash them.

2. Aim for uniform sizes of potatoes (cubes or whole) to ensure even cooking. When boiling whole potatoes of different sizes, you may need to remove the smaller ones before the larger potatoes finish cooking.

3. Use a large enough saucepan or pot that the potatoes will be able to move freely once the water starts boiling.

4. Cover the potatoes in water, but make sure there is room at the top, so you don’t end up with scalding water on your stovetop or your hands.

5. Use cold water to start. This helps potatoes to cook more evenly.

6. Use salt if you want, but it won’t make the water boil quicker. Salt will, however, bring out a bit more potato flavor.

7. Bring the pot to a full boil, then reduce to a slow simmer. Don’t cover the pot. Covering creates a sauna that makes potatoes mushy.

8. Start checking the potatoes after 5-8 minutes of simmering. In general, potatoes will take 10 – 20 minutes to boil.

9. To check the potatoes, pierce them with a fork, paring knife, or something else sharp. They should be tender, but firm.

10. Drain the potatoes. If you want hot mashed potatoes (or your serving them warm), get to it immediately after you drain the water. Otherwise, run cold water to stop the cooking process.

11. Store cooled potatoes in an airtight container in the fridge for up to 5 days.

Take a few moments while the potatoes are boiling and draining to destem the spinach. Then roughly chop it. This recipe calls for 2 cups of chopped, which is about 4 cups of spinach leaves. Chop the cilantro while you’re at it and mix it into the spinach. It's also a good time to dice a jalapeno or other hot chili if you are using it.

Let the potatoes drain and dry off a bit before you mash them. The spinach will have a lot of moisture when you start making the patties. Now, let’s put it all together.

Add the potatoes to a medium bowl. Sprinkle in 1 teaspoon of garam masala, ½ a teaspoon of cayenne pepper (crushed red chili will also work here), and ½ a teaspoon each of ground black pepper and salt. Add in 1 tablespoon of lemon juice. Then mash everything.

This is one of those times that lumpy mashed potatoes are a good thing. Not big potato cubes mind you, but a few lumps make the texture more interesting.

After you mix in the jalapeno, add about ⅓ of the spinach. Keep adding until it’s all mixed in. If you read my blog at all, you won’t find it surprising that I'll suggest mixing with your hand as you get toward the end.

In sticking to whole-food, plant-based principles, we use whole wheat breadcrumbs for the coating. If you need to make a substitution, use panko or chickpea flour. I usually make my own breadcrumbs by crumbling dry or lightly toasted bread in my food processor or spice grinder. You’ll want about ½ a cup.

Before you get to the patty-making part, let’s take a minute to strategize. These burgers are at their best when they’ve been chilled for at least an hour. I can usually maneuver enough that I can get my smaller baking tray in the fridge for this purpose. If you can’t, plan for getting a bit plates or 2 smaller in there so you can chill 5-6 patties.

To make the patties, form 5-6 equal balls from the potato-spinach mixture. Roll each ball in the breadcrumbs and form patties. Set the burgers on a parchment paper-lined or non-stick baking tray.

Chill the burgers, I mean. But if you can, this is the 'put your feet up part' I mentioned earlier.

Note: If the patties fall apart, most likely that the mixture is too moist. If this happens, try mixing in a tablespoon of chickpea flour into the mix. Check to see if it holds together better. If not, add a bit more flour. If you don’t have flour available, you can try adding a tablespoon or 2 of the breadcrumbs.

Once you’ve chilled the burgers for at least an hour, you’ll just place them in your preheated oven in the middle and bake them. Even at 4000 F. (2000 C.), I found the baking process a bit longer than I anticipated. Give it 40 minutes. You want to make sure the burgers are a bit firm before you flip them. Watch the tops though, you want brown, not burned.

Once flipped, you need about 10 minutes for them to crisp up.

The burgers are meant to be a bit soft in the middle with a crunchy outside. That said, aim to make patties that are 1 inch thick more or less. Super thick burgers won’t firm up in the middle, no matter how long you bake them.

Pineapple chutney is our favorite topper for these savory burgers. It accentuates the South Asian flavors. Any nice kind of chutney or relish is equally welcome. Don’t overlook the obvious – they are great with a smother of ketchup.

We agree these patties make a tasty way to enjoy potatoes and get added spinach into our lives. We can't agree about whether these make better burgers (between 2 buns) or as a brunch side. with a tofu scramble. I’m leaving that up to you. You’ll just have to try both and let me know. Peace. 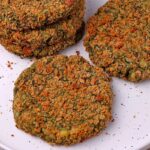