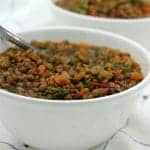 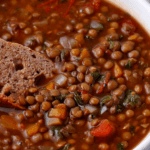 Although there are an endless number of lentil soup recipes out there (I’ve got a few myself), if you’re going to have just one, this is the ONE.

This is an easy one-pot soup that comes together quickly. Once you simmer the lentils, there's little left to do but add chopped kale and touch up the seasonings.

French (Puy) lentils. French lentils are small but durable. They’ll hold their shape and not fall apart. They are the perfect lentil for salads and soup, like this one where you don’t want the lentils to turn mushy. French lentils also have a slightly different flavor from other lentils - a bit nutty, peppery, and earthy. Your best bet as a substitute is black (Beluga) lentils. The flavor won't be as distinctive, but they will hold their shape.

Thyme. This earthy, mildly minty herb is a feature of many soups, stews, and everyday eats. It brings out the slightly peppery flavor of French or other green lentils.

Tarragon. If someone asks you to describe French cuisine, if you know nothing else, talk about tarragon. The leafy, weed-like herb has subtle anise (licorice) flavor that won’t overpower a dish but creates a unique flavor profile. It can be your 'secret' ingredient when people say, "Ummm. What's that flavor?' You can tell them or give them one of those 'that's my secret' smiles. I get the same reaction when I make tempeh stew, which also has tarragon and French lentils.

Paprika. Use smoked or sweet paprika. It's your choice. Paprika is what it sounds and looks like, dried and ground red peppers. There are various kinds of paprika with different combinations of smoky, sweet, or hot flavors. My preference is nearly always for hot smoked paprika. It has a more complex flavor than the others. Be sure you buy good quality paprika if you can. It’s worth the investment as it can be used in everything from chili to hummus.

Tomatoes. Use 2 large or 3 medium red, ripe tomatoes. Remove the core end and then dice them small. If you want to substitute with canned tomatoes, use 1 small can of tomatoes packed in juice. The tomato flavor will be a little more intense if you use canned.

Can you use fresh thyme instead of dried?

Fresh thyme will have a milder flavor than the dried flakes that most of us have in our cupboards. For this reason, you want to use a bit more of the fresh herb. A general rule is 1 tablespoon of fresh for 1 teaspoon of dried.

What is a substitute for tarragon?

Are French lentils the same as green lentils?

Big bowls of soup with flavor galore packed with all the power of good food. I don’t know if it gets better. I made a loaf of my favorite plant-based bread for dipping, and you’re talking about the kind of meal you could easily make for a crowd.

Although this soup has plenty of veggies, a flavorful veggie side salad is a good option.

Store leftover soup in an airtight container in the refrigerator. It keeps for 5 days. This is an excellent soup for taking to work in an individual container too. You can reheat it either on the stovetop or in the microwave.

To freeze the soup, allow it to cool to room temperature. Then place it in one large or individual serving freezer containers. Ideally, don't freeze it for longer than 3 months, but it can go longer if necessary.

🍞 Our favorite sides for lentil soup

Vegan French lentil soup with tarragon and kale is the last lentil soup recipe you’ll ever need – flavor that shines, food that satisfies.