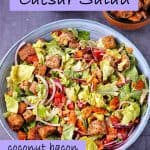 There are some assumption-busting truths about Caesar salad from the traditional kind you get in restaurants to my own healthy, crazy good vegan Caesar salad with quick coconut bacon. Assumptions, about salads? Yep. And it's time to bust a few.

Assumptions are unquestioning truths based on personal beliefs, logical constructs or unconfirmed facts. The Sun rose in the East this morning, it's 4:56 pm because kitty suddenly jumps up and demands her dinner and salad is 'good-for-you'.

I remember when I first started chipping away at that last assumption. Embarrassing as this is to reveal it was on a talk show in the '80s (lots of assumptions going on there). But I was riveted because it was all about weight loss and anything about that quest, my quest, got my attention. After the segment where they revealed the results of the lie detector test, this man who has lost an impressive amount of weight, held up a Cobb salad in one hand and a cheeseburger in the other. His reveal was the amount of calories and fat in the salad. At that moment, I got it (partially, at least) – don't assume that every salad is healthy.

There is a connection between food assumptions and outcomes.

As a professional dieter, I treated salads as 'free food', but there are pounds of difference between a simple salad of greens, beans, and oil-free salad dressing and that festival of fat Cobb salad I saw on the TV.

All this happened in the 'dark ages' or pre-Internet if you will. So, I dusted off my collection of diet books, conveniently only opened to the meal plans because I assumed the 'science' was real, and I started looking at those calorie/fat charts that were in the appendices. Existing assumptions were challenged and replaced them with some hard facts like what's in the salad is far more important than the name. So….

Caesar salad was not invented by that Caesar, this revered salad originated in Tijuana, Mexico, so the legend goes. I learned all about it on a cooking show last year and found it fascinating that an Italian-American, Caesar Cardini invented the first recipe in an attempt to attract tourists to his resort. In those days, the salad consisted of garlic croutons, Parmesan cheese, boiled eggs, olive oil, and Worchestershire sauce tossed together with Romaine lettuce. Another assumption bites the dust.

Our vegan Caesar salad has little left in common with the original except the croutons and lettuce, but at this point, we should never assume about Caesar salad. Over the years, it's undergone many a metamorphosis and today, it comes down to three main assumptions – lettuce, croutons, and creamy dressing.

The secret to this creamy dressing is simple – ground almonds. I used whole blanched almonds, meaning they were peeled (the white ones). Slivered almonds will also work well because, in the end, we are going to grind them.

If you can find raw almonds, you can enjoy peeled almonds. And the good news? It's simple:

The answer to your question, can I just use unpeeled almonds, is 'yes'. Your dressing might be slightly less creamy unless you have a high-speed blender and it may not be quite a bright white, but you'll have an equally great taste. And even though it's easy enough to peel almonds, you might also be asking, 'why the extra effort?'. When it comes to cooking, I exert no extra effort unless there is value for said effort.

From the outside in

Almonds hold a special place in my heart – they are probably my favorite nut. I consider a few raw almonds the perfect post-workout treat because anything to motivate a workout is good. But I always know when I've overdone it. Not the workout, the almonds.

You don't need to be a scientist or almond expert to know if almonds are difficult for you to digest. Take a close look at an almond and it makes sense. After the shell is removed, unpeeled almonds have a tough outer skin. For the almond, the outer shell and the skin serve as protectors so the softer nut inside can germinate and thus, more tasty almonds grow.

The phytic acid in almond skins, which protects the inner nut, can interfere with enzymes that can inhibit digestion.

But there might be something more important to consider when it comes to those crunchy almonds, that I could personally eat by the handful.

There's a good reason why you should always buy raw nuts whenever possible. 'Roasted' usually means added oil and other preservatives. And if you have a problem with digesting the skins, the added oil might not help in that department. Also, the added oil can heighten your nut addiction, meaning you'll eat yet another handful – even when you know you've had enough.

After all this nutty almond talk, you might be asking why on earth I'd suggest making an almond Caesar dressing. I have a good answer – it's delicious. And let's not slag off those almonds. There are plenty of nutritional reasons you should eat almonds (in moderation)

The almond Caesar dressing is one thing that sets this vegan Caesar salad recipe apart from the rest. We can debate it against the coconut bacon and crunchy croutons, but dressing 'makes' a salad. you aren't adding much fat with ¼ cup of ground almonds and the thickness they bring to the oil-free dressing is only comparable to the satiation you'll get once you eat it.

Vegan or not, I assume that any Caesar salad comes with crunchy, garlicky croutons. But here's an assumption you can break – it's not oil, it's a bit of liquid that allows the herbs and garlic to mix with the bread cubes.

I use a combination of 2 tablespoons of vegetable broth, lemon juice and Tamari (or soy sauce) respectively and just mixed in thyme, oregano, and garlic powder. The trick to getting all your bread cubes covered, as I've learned is the quick stir or shake. Don't combine the liquid to the bread cubes and allow them to linger. Otherwise, a few cubes will hog all the seasoning. The easiest method I've found is to use a bowl with a lid and just seal and shake.

After that, you want to kick them into the oven and allow them to bake up until they are crunchy. The only challenge left at that point is leaving them alone, so you have something left to put on the salad. What is it about croutons? Impossible not to snack on.

Coconut bacon – because anything bacon

This Caesar salad recipe makes no assumptions, but I'm fairly certain that the lovely Caesar Cardini would not have expected coconut bacon to show up on his namesake. Don't assume dear Caesar, don't assume.

A plant-based diet has never deterred me from my love of bacon flavor. And I can't think about dill pickle pasta salad or scalloped potatoes without plant-based bacon. But all those recipes assumed tofu bacon and rightfully, it remains one of our favorites, but bacon is about flavor.

Bacon flavor in my book is all about combining Tamari, liquid smoke and maple syrup. That's your foundation – salt, smoke, sweet. I added vegan Worcestershire sauce and hot smoked paprika to give the coconut flakes a bit more depth and spice. And it was smashingly good. Another one of those, 'hide the ingredient before serving' situations. Far too tempting to have those hanging around.

The first time I made coconut bacon before I tweaked the recipe, I knew it would be tasty. How could it not? Bacon flavor meets coconut? And I should have known from toasting bacon for chopped Asian salad that it can get away from you quickly. And the first time it did. I lost a bit of focus, didn't set a time and alas, burned coconut bacon.

Coconut flakes are thin, they burn quickly, like seconds after the last time you check them. So, place them in the middle of the oven, toss them a few times and back them until they brown. Coconut likes to trick you into assuming that it won't crisp up once you take it out of the oven. Don't fall for it. Once they brown, remove them from the oven, spread them on a plate and dare them not to crisp.

We all make assumptions, it's a part of our humanity. Acknowledging that means that we can deconstruct a few from time to time. Challenge our thinking or reconfirm our beliefs. It could be as simple as looking through our salad lens, focusing on the ingredients and discovering healthier ways to reconnect with old favorites like Caesar salad. To quote Lemony Snicket:

Making assumptions simply means believing things are a certain way with little or no evidence that shows you are correct, and you can see at once how this can lead to terrible trouble. The Austere Academy

So whether it's a recipe, something we watched on the tube or read on the Internet, best to do some digging before we arrive at our conclusion and open a new path to assumption. Maybe it's a good time to dust off a few lingering assumptions and check out the appendices rather than just open to the diet plan part of the book. Learning happens everywhere, but only if you are open to the view. Peace. 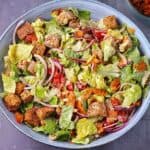 Timing tip: start by making coconut bacon first and then prep the croutons. Make the dressing and prepare the rest of the salad while the croutons bake.