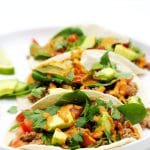 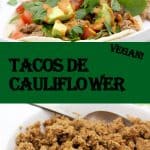 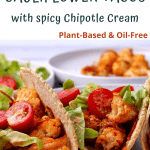 Grab a sheet pan, mix up homemade taco seasoning, and get ready for terrific roasted cauliflower tacos. They could only be made better with the coolness of chipotle cream, so we're making that too!

Besides all that healthy taco satisfaction, there’s a lot to love about this recipe. And yes, I’m talking about cauliflower. It’s easy to prep and in the 25 minutes or so you’ll need for the baking, you have just enough time to make the chipotle cream and any other yummy ingredients you plan to add to your special tacos.

We like our tacos with shredded lettuce and sliced tomatoes. Let the spicy cauliflower and sauce do all the talking. But you can build on this foundation and include avocados, black olives, or even a mix of sliced cabbage and carrots would add a nice crunch.

Because our ultimate goal is creating some taco madness, you want to cut your cauliflower florets small enough that you can load them up. They will only slightly reduce when they roast, so start with the right size for taco stuffing.

How to I cut a cauliflower head? I Stand it on its head. You heard me. Start by placing the whole cauliflower with the stalk up. Carefully, hold it with one hand while you slice down to remove the leaves and cut each 'branch' off.

Cut the cauliflower into small florets, cutting big pieces in half or quarters if necessary. If you started with a bag of cauliflower florets, then just make sure the pieces are small and about the same size.

It's uniformity of size that makes roasting any veggie more successful. It isn't all about making it picture-perfect. Ingredients of similar sizes get done at the same time (roast evenly).

We’ll be shaking the cauliflower in taco seasoning before baking, so you want the cauliflower a bit moist. Of course, we don’t rely on oil for those kinds of jobs. Why would we? We have veggie broth. Add 1 tablespoon to start. If you need more, add another.

It’s that little bit of moisture that gives the spices something to stick to. There’s nothing more frustrating than seasoning veggies, roasting them, and then discovering all the seasoning lying on the tray. The veggie broth trick also works when you aren’t adding seasonings. I use this method whenever I am roasting veggies like sweet potatoes - even when they are headed to a salad.

Once the cauliflower is where you want it, add it to a bowl or container with a lid. If you don’t have that available, use a plate to cover the top. That will do.

I added onion to the mix because roasted onions, the kind that gets a little brownish, are the bomb with tacos. Don’t spend time dicing them, they will just disintegrate into the baking dish. I suggest cutting the peeled onion in half, then slicing it into half-moons.

I do a triple shake. I add the cauliflower and onions and gently shake to mix it up. Next, add the vegetable broth. Give that a good shake. You want to moisten up all the crevasses. Finally, sprinkle the taco seasoning over the top. Now, shake, shake, shake. Yes, you can sing while you do it.

I quit buying those taco seasoning packets quite a long time ago because they have loads of added salt and sugar. If you have a more elaborate mix, use it. Otherwise, I use a simple toss together of the following:

This makes enough taco seasoning for a medium head of cauliflower. You can adjust amounts accordingly if you want it less (or more) spicy. Pay attention if you use hot smoked paprika (we do) as it will also add heat. For us, that a bonus, because we like it hot. I suppose some do.

Think about the salt, especially if the broth you use tends to be salty. You have enough spices going that the salt isn’t necessary for bringing out the flavor of the veggies.

If you can, don’t skip the chipotle cream. It’s amazing. The spice and coconut flavor is meant for cauliflower. This is one recipe where I prefer it over vegan sour cream. Yes, that does happen from time to time.

You may want to play with the amounts of coconut milk to hot sauce. You can also use chipotle peppers in adobo. Especially if you have a convenient stash of them in the freezer. Use 2 whole chilies if you want it spicy.

The ground flax or chia seeds are used as a thickener. It takes a minute to grind the seeds in a spice grinder if you need to. Don’t skip that step. Even small seeds like flax won't break down and thicken the way ground will.

Use a rule of twice in reverse here. That’s a fancy way of saying if you want 3 tablespoons of ground, start with 1 ½ of seeds.

I’ve learned through trial and error that you get a far better consistency if you add all the ingredients to the blender. That bit of agitation mixes everything and encourages the flax seeds to start thickening. The chipotle cream will also get thicker as it sits. Make it before you take on the cauliflower or immediately after you pop it into the oven, and you’ll be good to go.

To be honest, I tried a few variations of cauliflower tacos (some quite complicated). But when I want something quick and easy, this is where I  head. That said, I’ve been known to toss slices of red or green pepper into the mix (and the spices).

If you struggle to get good corn tortillas where you live (I do), don’t let that come between you and your tacos. Catch my full tutorial. My motto: never be caught without corn tortillas (or at least, the ability to make them).

We’re there, right where we want to be and that my friends, is all about tacos. Just the idea of a warm corn tortilla stuffed with spicy, roasted cauliflower and onions, loaded with a few extras, and topped off with chipotle cream has my mouth-watering. I’m not even bothered if I have to resort to holding with 2 hands. It’s all about the satisfaction of eating something yummy that's just as good for the insides. Peace. 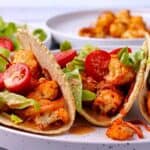