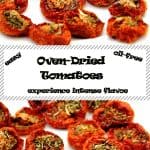 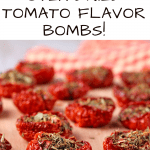 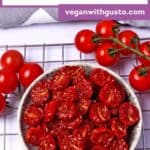 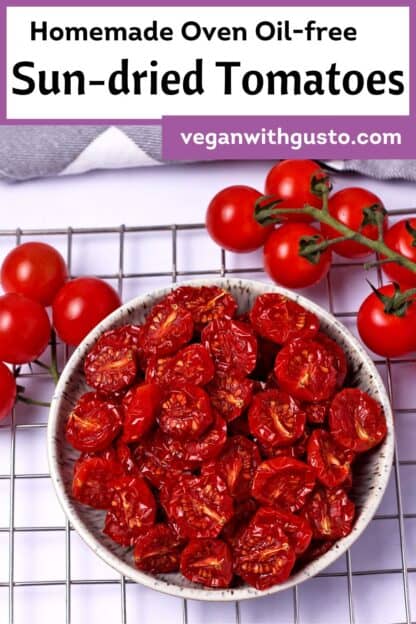 Homemade oven sun-dried tomatoes are easy to make and impossible to resist. With this oil-free recipe, you can enjoy handfuls of these sweet tomato flavor bombs with guilt-free pleasure.

This post contains helpful tips and tricks to make sure you're successful in your first attempt. Below, you'll find a handy table of contents with links. But if you're in a rush, please use the link at the top to jump to the recipe card at the end!

⭐Why this recipe works

Oil-free mission. My motivation for trying my own oven-dried tomatoes recipe was two-fold. First is the oil factor. Oil-free. That's the difference between this recipe and other sun-dried tomato recipes you'll run across. Jarred sun-dried tomatoes are swimming in the stuff. If you can find them water-packed, they usually come at a premium.

Usually, I rely on dehydrated tomatoes that are packed dry. They can, however, be extra salty (depending on the brand). And although they are handy for recipes for tossing them in the food processor or blender, they aren't great as a salad ingredient.

Flavor. There is a difference between store-bought packed-in-oil tomatoes and the dehydrated kind. There's even a more enormous difference in the taste you are about to experience when you make your own. It's nothing short of profound.

Healthy sweetness. Sans oil, you get all the nutritional advantages of sun-dried tomatoes in a low-calorie, no-fat form. And best of all, clarity of flavor that's like a hit of candy.

Tomatoes. Look for ripe tomatoes that a smaller in size. Cherry tomatoes, plum tomatoes, or small Roma tomatoes are possible options. You should be able to find them in your local grocery store. If you grow your own tomatoes, be sure they are not overly ripe. Older tomatoes may have excess moisture making them challenging to dehydrate. Otherwise, check out your local farmer's market when tomatoes are in season. In the winter months, you can usually rely on a few types of tomatoes, which generally means cherry. That's what I'm using for this example.

Tomatoes are substantially reduced through the drying process. If you start with tiny tomatoes, they'll be super-small when you are done. On the contrary, large tomatoes have too much moisture and could take forever to dry. Save those for your favorite recipes or chopped salads.

Salt. A pinch of sea salt intensifies the flavor and helps (a bit) with the dehydration process. A salt substitute is also a good option.

Equipment needed. This homemade sun-dried tomatoes recipe doesn't require a fancy food dehydrator or other special equipment. You only need a sharp knife, your oven, a baking sheet, and parchment paper (or a silicone baking mat). During the low-heat baking/drying process, tomatoes release their juice. They get messy and a little sticky. Rather than ruin your baking tray, line it first.

Aluminum foil. It can react with tomatoes, causing them to become bitter. Don't use aluminum foil to line the baking tray.

Prep. Be sure to slice tomatoes lengthwise from the stem to the end. Place them in a single layer with the cut side facing upwards on the baking tray. You'll have mushy tomatoes if you use larger tomatoes and cut them into quarters. That's not our mission.

Tip: Add salt from the hand. Salt or other added flavors will intensify as the tomatoes dry, so only add a little. The best way to keep control when adding salt is to put it in your hand's palm, where you can see the actual amount. Then use your fingers to sprinkle it over the tomatoes.

Patience. This is a low-effort recipe, but it takes several hours for the tomatoes to dry. Stay the course and don't increase the oven temperature. A slow and steady baking process wins the tomato race.

Press if needed. After 2 hours of baking, when the tomatoes are super-soft and bubbly, you can gently press them to help release their liquid.

Oven tip. After 2 hours, rotate the baking tray. This can help with a more even drying process.

When are my tomatoes done?

Oven-drying is all about reduction, so a good rule for doneness is to reduce by half. The tomatoes should be dark red, not black, on the edges and appear firm. Homemade sun-dried tomatoes won't have the texture of the dehydrated kind. They'll be intensely flavorful but somewhat tender.

Even if your fresh tomatoes appear equal in size, some dry quicker than others. As the tomatoes start to near the end of the drying process, remove any dried tomatoes before they burn.

Yield. Ultimately, the calculation of fresh tomatoes to dried isn't precise and depends on the tomatoes you use and how dry you want them. I used 2 ½ cups of cherry tomatoes and ended with 1 cup of dried tomatoes.

After 2 hours of oven baking, feel free to add any additional herbs or spices after you press the tomatoes. Consider a pinch of garlic powder, onion powder, herbs de province, Italian seasoning, or red pepper flakes. Use the palm trick to control the amount you use.

Are sun-dried tomatoes good for you?

Homemade sun-dried tomatoes are naturally gluten-free and free from other additives. If you use organic tomatoes, they are also pesticide free.

Should you rehydrate oven-dried tomatoes before using them?

Unlike dehydrated tomatoes, homemade sun-dried tomatoes don’t need to be soaked before using in dressings, sauces, or other recipes.

Can you use the air fryer to dry tomatoes?

If you want to make air fryer "sun-dried" tomatoes, simply slice the tomatoes in half and pre-heat the air fryer to 240 degrees (105 C.). Fry for 40-45 minutes and check after 30 minutes. Give the tomatoes a little shake, so they don't stick to the bottom of the tray. This is a quick solution when you only want to make a few.

From salads, and pizza, to your favorite recipes, oven-dried tomatoes add unique, intense tomato flavor and sweetness. They are well with fresh herbs. You can even store them with fresh basil or rosemary to infuse them.

There are so many delicious ways to incorporate sun-dried tomatoes that the list is endless. They add extra flavor to a creamy sauce for pasta. Drop them in a pasta salad or puree them to make a savory salad dressing.

And let's not forget to enjoy them on a few crackers or avocado toast. It's a great way to get some healthy snacking in. Let your creativity rule the kitchen (and your belly).

Place unused oven-dried tomatoes in an airtight container. Although they are now dry tomatoes, it’s best to store them in the refrigerator rather than at room temperature. They stay fresh for about 10 days (although they’ll probably be gone long before that).

Freezing is simple. Estimate how much you're likely to use for a recipe, and then freeze that portion in a freezer bag or container. 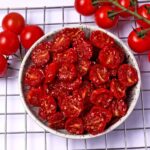