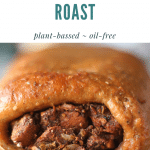 Looking for a holiday dish with a healthy twist? Let stuffed seitan roll be the centerpiece of the table. Savory, mushroom-cranberry bread stuffing is surrounded by a ‘meaty’ seitan (vital wheat) roast.  What a treat!

As my repertoire of healthy side dishes has expanded and we’ve excitedly chowed down on vegan scalloped potatoes, creamed onions and everyday Brussels sprouts & grapes, something was always missing. That’s the central dish that ties all those yummy sides together. This is the motivation of my quest for the perfect stuffed seitan roast.

From the Inside-out: start with the stuffing

Stuffing is just one of those things. We all have our own way of making it. Different ingredients or spices, those little things that make it special. But for stuffing’s sake, let’s at leady agree that it’s about bread (ok, or corn bread), vegetables (onions at the least), spices and broth (or something else to moisten it). At least, that’s my starting point.

With the above in mind, I want to acknowledge that there are as many variations on the stuffing theme as there are cooks. From stuffing from a box to elaborate, multi ingredient, go to the specialty shop kind. My basic (Mom’s kind) of stuffing is someplace in the middle. I like a combination of veggies including onions, celery, carrots and mushrooms. For the purposes of stuff seitan roast, it’s also a good idea to include mushrooms as they will help keep your stuffing moist.

Is it stuffing or dressing?

When I started exploring this recipe, I was trying to explain it to a friend and, after looking a bit puzzled said “oh, it’s seitan with dressing”. What? Well, yes. Whereas the term stuffing seemed apt to me this was another reminder that not only do we have our own ingredients, we have our own names for the final dish. Thanks to the Victorian’s for cleaning up that foul (or fowl) term stuffing to the nice version, dressing. I also learned that some folks call it filling (not to be confused with pies). Oh boy.

No matter what you call it, we’re going to create a flavorful seitan roast and stuff it (yes, stuff) with our stuffing-dressing-filling. In my world we’ll do it all in one pan. Then we’re going to stuff it in our mouths. I don’t think there’s a dispute about that part of the term, but you never know. Perhaps that’s a safe discussion/debate for the dinner table?

Onward to the Seitan roast

Enough stuffing about stuffing, let’s get to what wraps it all up – the seitan roast.

Seitan or vital wheat gluten, wheat meat, wheat protein or just wheat gluten looks like flour, but it behaves very differently.  Seitan is touted as a meat substitute, but it handles and behaves much differently from tofu and tempeh. First, it is not soy based. It’s made from hydrated gluten (the main protein found in wheat). That gluten gets released when you knead it and it’s what makes the ‘dough’ sticky when you handle it.

I’ve been working with seitan off and on for several years and I’ve had my fair share of successes and failures. Not claiming expertise (I’m always learning), but there are a few tidbits I’ve picked up along the way. This is by no means an exhaustive list, but my highlights.

Be generous with the flavoring

Seitan on its own is just a spongy flour dough. The flavorful liquid you use, along with dry ingredients such as mushroom powder or nutritional yeast make a huge difference. I always include vegetable broth, but I nearly always add beans of some kind for texture (in this case chickpeas).

You’ll notice in this recipe that I include aquafaba and if your wondering, that’s a fancy term for the liquid in the can of beans. I mostly use chickpea liquid in cooking, but aquafaba has wonderful qualities and uses from thickening to binding ingredients. I quite often use it in baking as an oil substitute.

Be resilient - The don'ts

Don’t be afraid to flip things – You’ll be basting the seitan roast often to keep it moist, but I’ve found that the top always gets done (and quickly overdone). The bottom usually remains spongy and too ‘doughy’ for my taste. For this reason, I recommend that you flip it midway through the baking process. You’ll notice that once you’ve baked the roast for 25 minutes, it won’t fall apart when you handle it. I tucked 2 spatulas underneath to help and to make sure it wouldn’t stick. Then, just a gentle flip over. Flipping back will be even easier.

There is no reason why a meat-absent table should just be filled with sides. I for one, am never focused on what I’m not eating. Of course, if those sides of creamed onions and scalloped potatoes mysteriously end up easily within my reach, you won’t catch me complaining. I will say that stuffed seitan roast seriously balanced our table and hey, anything I can add more gravy to is always a pleasure.

Let’s face it, the center of the table is really about who sits around it, the camaraderie, the conversations. We get to create memories with other folks. Hopefully, they are good memories, not built around winning the trigger positions. The biggest controversy might be stuffing versus dressing (with a side of filling for good measure). When you get folks around the table (even if they are the same people you see every day), be sure to have a laugh or ten. Life’s too short.  It’s far easier to acknowledge different perspectives than it is to change deeply held beliefs. And just like stuffing, we all have our own special ingredients that make it our own. Peace.