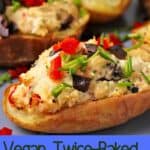 Vegan twice-baked potatoes - a decadent way to enjoy savory mashed potatoes with sour cream, olives, chilis, and chives tucked in a crispy baked potato shell. These are the ultimate simple side dish or shared main extraordinaire.

Potatoes, potatoes! We love ‘em. We're willing to try any potato recipe in our house. Baked, also known as a jacket potato, depending on where you are have to be on the top of our list. Twice-baked or stuffed. It’s a simple concept celebrating the best of both potato worlds. Regular baked potatoes and a large bowl of mashed. The 'twice' part includes baking them a second time so that the tops get brown and toasty.

Twice-baked is a fun way to dress up baked potatoes because it’s quick and easy. It's also a dependable family favorite. This recipe is a little savory, a little cheesy, and a dash of spicy. What could be better? Oh, yes, all in a potato!

Potatoes – I used 6 medium thin-skinned Jersey potatoes for this recipe. Heavier skinned potatoes, such as Russets, won’t get crispy on the outsides. That said, any potatoes you have hanging around can be whipped up and baked twice.

The suggested amounts for the rest of the ingredients are based on 1 ½ pound (700 grams). Most folks will end up eating 2 halves (1 potato). The halves make eating a third a little less intimidating (and obvious).

Vegan sour cream – I always make my own sour cream using cashew cream or sunflower seeds. This is because it's more convenient than running to the store from where I live. Also, I can control the ingredients and prefer the fresh flavor of homemade. There are a lot of available options if you want to grab it from the store.

Black olives – You don’t need many olives to enhance the flavor. This is especially true because they'll be chopped or at the least sliced. Black olives complement the spice of the fresh chili and mellow it a bit.

Fresh chili – This ingredient is a bit generic. The idea is to present you with options so that you can make delicious stuffed potatoes with what you might have on hand. I used a red jalapeno; however, any fresh chili you like can be used. I’ve also made this recipe using a few jarred jalapenos.

Chives – Fresh chives and potatoes are winners. I’ve made this recipe using finely chopped scallions or green onions, but the clear winner in my book is chives. They have a crisp, mellow oniony flavor that doesn’t overpower the rest of the ingredients.

The first order of business is to bake the potatoes. If you bake a lot of spuds, as we do, you’ll have ‘your’ way. I always wash and scrub my potatoes, and if one has a dark spot, I scrape it off or cut it out. It doesn’t hurt a thing.

I’m in the habit of running a sharp knife around the long side of potatoes that I’m planning on cutting in half. You can also simply pierce them with a fork a few times. The point is that you need to create a steam escape valve so that your potatoes don’t create their own. That’s what makes them crumbly and breaks them into chunks. A mini potato explosion, even.

Place the potatoes on a baking tray and pop them into the oven at 4000 F. (2000 C.). Plan on 45 to 60 minutes for the baking time. Ultimately, this will depend on the size of your potatoes. After 30 minutes, check the potatoes to see if they are getting soft. Be careful, as they will be hot. Use a folded paper towel, oven mitts, or clean cloth for this purpose. For a final super check, pierce the potato with a fork. The potato should be soft past the skin.

Once the potatoes are done, remove them from the oven and allow them to cool for a few minutes so that you can safely handle them.

Now, get scooping. Cut each potato in half, scoop away the middles, leaving about ¼ of an inch rim of potato around the skin. Mash the potato middles with sour cream, salt, and pepper. You can use a potato masher, electric mixer, or even an immersion blender for this purpose. Once you have the potatoes creamy, use a spoon to mix in the olives, chili, and chives. If you want, save a few chives as a final garnish.

Now, it’s just a matter of refilling those lonely potato shells with the yummy potato filling and popping them back into the oven. Depending on how long. Allow 10-15 minutes for them to get slightly brown and crispy on the top.

what to serve with twice-baked potatoes

We love our twice-baked straight from the oven. If you want to shake it up, consider a side of vegan sour cream or something more exotic like avocado guasacaca sauce. Different topping ideas include plant-based bacon, vegan parmesan, or another vegan cheese, salsa, hot sauce, or Pico de Gallo.

You can also include a few other ingredients in the potato mixture including red pepper, chopped broccoli, vegan bacon, one or two cloves of garlic, coconut bacon, or nutritional yeast.

Can you bake the potatoes in the microwave?

You can do the initial bake of the potatoes in the microwave; however, the skins might not get as crispy as if your oven-bake them. One way to have the best of both worlds is to start them in the microwave for 15 minutes (depending on the potato size), then transfer them to the oven for the last few minutes.

Can twice-baked potatoes be made a day ahead?

Make twice-baked potatoes a day ahead by baking them, making the potato mixture, and stuffing the potato skins. Transfer them to a container or place them in a dish or on the baking tray, on a single layer and store them in the refrigerator. When you are ready to serve them, heat them for 15 minutes in the oven.

Can twice-baked potatoes be frozen?

You can freeze twice baked potatoes for up to 3 months. Prepare them according to the recipe, then allow them to cool completely. Individually wrap them before placing them in the freezer.

other stuffed recipes to love 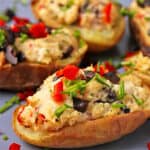